Simultaneous action, development, or occurrence. The state of operating or developing according to the same time scale as something else.  “Some individuals do not remain in synchrony with the twenty-four-hour day”

(For the similarly named song by The Police, click here.)

In human development terms, synchrony is the dance that happens between babies and caregivers, right around three months of age.  In highly technical terms, it’s what makes adults go completely ga-ga when a baby smiles at them—suddenly, we get huge smiles on our faces and we start talking like we forgot all those grammar lessons from fourth grade. 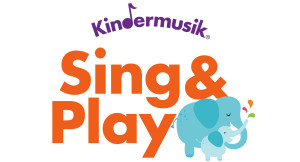 Come into a Sing and Play Kindermusik class and observe the way moms, dads, grandmas and grandpas interact with their babies.  Synchrony abounds.  It is part of why Kindermusik is about developing the whole child, in this case, social skills.

“One study found that those mothers who took longer to bathe, feed, and diaper their infants were also most responsive.  Apparently, some parents combine caregiving with emotional play, which takes longer but also allows more synchrony” (pg. 141).

Interestingly the adults are the ones who imitate the babies, not the other way around.  This explains why newborn babies don’t elicit the same response from us.  They get plenty of oooh’s and aaaah’s, but no peek-a-boo games.

What happens when we don’t react this way, when we don’t give the kids this attention?  Ed Tronick, the chief researcher on the still-face technique, shows us (fair warning, it might be really hard not to reach through the computer and give the child some love, but rest assured it doesn’t last long, and ends well):

So, obviously, this is something that comes naturally to us as caregivers, whether or not we’re enrolled in a Kindermusik class.  But Kindermusik has given me is a large array of songs that I can sing to help slow me down during those routines and to engage in this responsiveness cycle with my children.  I can spontaneously burst into a rendition of “Bubbles,” while I’m bathing them, “I See You,” when doing a peek-a-boo game, or “Little Red Wagon,” when I’m bouncing one of them on my lap waiting for the oil to get changed.  And, gratefully, these are songs that I can actually tolerate listening to while we’re driving (unlike Other-CD’s-That-Must-Not-Be-Named).

And, as I have said before, I especially love coming to class and having that time with them there.  While I strive for it daily with my kids, it is the one place where I can come and just be truly present with them—no laundry to worry about, homework to get done, or kitchen floors to mop.

It puts a song in my heart!