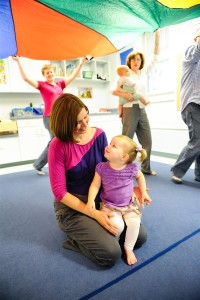 Recently, on an episode of This American Life, they interviewed a woman named Karen Stobbe who gives workshops on employing the techniques she learned as an improv actor to take care of family members who have Alzheimer’s or other forms of dementia. Karen’s mother has Alzheimer’s, but Karen’s husband, Mondy, has a special gift for using his improv talents in dealing with the challenges his mother-in-law’s illness presents. His warmth and humor have had such a profound impact on her life that she has inserted him into any remaining childhood memories she has—memories for which, of course, he could not have possibly been present.

It made me wonder, what exactly would happen if, instead of “No!” all the time with my kids (well, unless they wanted to put themselves in danger), what might happen if I used the improv technique they were highlighting: “YES! And?” The idea is that instead of shutting down my kids’ ideas, I respond with warmth and kindness, and maybe even added something to it.

My son was listening with me, and we’ve decided, as a secret from his dad and two sisters, that we would work on saying, “Yes! And?” more often. He reported yesterday to me that it is making a huge difference in the way he is listening to his sister, a relatively new reader, exclaim with excitement what page of a book she’s on.

“Oh yeah? And what’s happening in the story?” he asks.

As it turns out, I’m not the only one with this idea that saying, “Yes! And?” might have an impact on my parenting. There are several great TED talks and multiple short how-tos available on the Internet, none of which are about improving your comedy routine for the next, nationally televised comedy sketch show. Rather, they are about cultivating conversations, making your business better, and maybe even changing the world.

Here’s the best, shortest one I found, if you’re interested:

Coming to Kindermusik class can be a great big risk. We don’t know if our kids will enjoy it, if they’ll cause a scene (and not in some great Improv Everywhere way), if they’ll follow instructions or even learn something that particular day. Just daily parenting can be that risky, actually. Nevertheless, the whole of the Kindermusik experience can be one big, “Yes! And?”:

“Yes! You can pretend the egg shaker is an apple! And look how it got bigger when I plucked it from the tree for you!”

“Yes! That scarf is a great cape! Where should we fly? How about to visit Grandma?”

What adventures might you have in class the next time you come to our Kindermusik studio, with this little technique in mind?