I just got back from seeing Love’s Labour’s Lost at the Utah Shakespeare Festival. Being here feeds my soul. However, I found myself totally distracted during the actor’s musical performance. The woman playing Jaquenetta (Betsy Mugavero, in this case) was playing a mean guiro, with which I have become very familiar during my time at the Kindermusik. The page, Moth (played by Melisa Pereyra), was playing the castanets. 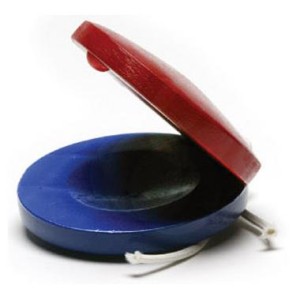 After a moment, I became enthralled with her movements, realizing that for all the time that I’ve played with the castanets during instrument play in the studio, I have never once figured them out to my satisfaction. Yes, I find them just as much fun to play with as my kids. I promise I take turns.

Ah, grateful that we live in the information age, and for a wi-fi connection. For your education, I give you three “how-to” castanet videos that I found especially helpful (though I don’t have my castanets here to practice, you can bet I’ll put them on when I get home).

Do you wonder why we have castanets at the studio? First, it gives kids yet one more instrument to explore according to their own choice, helping them learn and retain information better. It’s also a great way to give our kids some power over their lives, something that in turn helps them follow our instructions when needed. Additionally, playing with castanets exposes to different timbres, and any time kids work on keeping a steady beat they are learning a foundational skill for many other activities, including running or cutting with scissors. Finally, it means that one day, they may be sitting in the audience of a play, and they’ll know what a castanet is, and stand in admiration of anyone who can make it look easy.