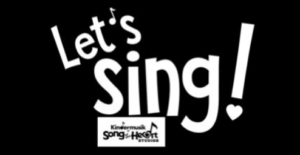 You may have noticed our new “Let’s Sing!” initiative in our studio. We have always encouraged you and your little ones to sing along with us during our classes, but sometimes it’s easy to forget to participate in this most fundamental way.

We get it. Not everyone feels confident singing. Sometimes it’s easier to let the educator take the lead, and enjoy class in a more passive way. Maybe you’re intimidated by the other strong voices in your class. Whatever barriers might exist that make you feel less inclined to sing, we want to remind you of the reasons why singing along is so beneficial!

No matter your vocal ability, Kindermusik is a safe place to use your first and most basic instrument. Your voice is a huge part of who you are. And you are welcome here, just as you are. Whether you have classical vocal training or none at all. Whether you’ve got vocal confidence or none at all. Where else can you let your inner child out to play and be completely safe? Kindermusik isn’t just a safe environment for your child, it’s a safe place for YOU. We invite you to throw those inhibitions out the door, tuck those cell phones back in your bags, and be fully present, both physically and vocally, with your child when in our studio.

I’ve been thinking. Singing TOGETHER in Kindermusik class is such a gift. Not only for the children but for the grown-ups, too. Did you know that communal singing has long been on the decline in the United States? That fact kind of makes me want to put my head in my hands and cry. But then I realize I get to sing every day. A lot. And, I get to help families do the same. That makes my heart just sing!

The conversation.com shares,
“Shows like American Idol have promoted the notion that singing is a rare ability reserved for the talented few, and that those without such talent entertain us only by being ridiculed and weeded out.

This “talent mindset” of music runs counter to what psychologist Carol Dweck calls the “growth mindset” that is considered critical for learning: Students who view their success as a result of hard work will persevere through challenges, while students who believe their success lies with some innate ability – like “talent” – are more likely to give up.

My own research found that if children have a negative view of themselves as singers, they are much less likely to participate in music of any kind.

These self-perceptions of a lack of musical talent can then become a self-fulfilling prophecy. Research shows that adults who dropped out of music as children may lose their singing skills through lack of use and opportunity.

Kids who love music but do not think of themselves as musical could miss out on many of the social and cognitive benefits of music participation, on the experience of feeling connected to others through song.”

What is a music teacher to do? Sing! What is a parent to do? The same.

Sing in Kindermusik class, in the car, at home, at bed time, at meal time, at play time. How about just about ALL the time?

Karen Loew in The Atlantic says,
“In these divided times as much as ever, we need to do some singing and feeling together, united as both citizens and amateurs.”

I wholeheartedly agree. Let it begin with Kindermusik!